Should you buy a Faberge egg on eBay?

One of the world’s most prestigious auction houses, Sotheby’s BID +0.72%  , has teamed up with eBay EBAY -0.66%  , one of the world’s largest online marketplaces — and seller of tchotchkes — to sell art online. Despite the risks of buying art via the Internet, experts say art collectors are becoming braver.

On Monday, Sotheby’s and eBay said art and collectibles from the luxury auction house will be made available to eBay’s 145 million active buyers (although many may not be able to afford Sotheby’s prices). Both companies say they’ll focus on items at price points where their respective customers converge such as jewelry, watches, prints, wine, photographs and 20th Century design. “We believe there is a great opportunity, through this partnership, to truly make art more accessible to exponentially more collectors,” Bruno Vinciguerra, Sotheby’s chief operating officer, said in a statement.

It’s a co-branding oddity, says Heidi Lee-Komaromi, an art adviser and founder of consultancy HLK Art Group and director of strategic partnerships at Artnet, an art market data firm. “This is a high-low relationship to say the least,” she says. But customers may feel reassured that Sotheby’s team of experts will have checked the provenance of the items for sale and, she says, “Sotheby’s should make sure that prices are kept in check.” Financially, the partnership makes sense, she says. “EBay has a very robust platform and can be used easily instead of investing millions of dollars to build their own from scratch,” Heidi Lee-Komaromi adds.

Collectors are getting more daring about buying art online. “Buying art based on a digital image has become the norm rather than the exception,” a 2013 report by international specialist insurance company Hiscox concluded. The report was based on 101 international art buyers on ArtTactic, a London-based art market research and analysis firm, 130 established international art collectors and 58 international contemporary art galleries. Still, only one-quarter of those surveyed have spent over 50,000 pounds ($85,000) or more buying art online. Another 25% were willing to spend more than that on a single artwork.

That said, the online art market is still minuscule when compared with the overall size of the industry. Global online art and antiques sales in 2013 were estimated “conservatively” at more than 2.5 billion euros ($3.4 billion), according to a recent report released by the European Fine Art Foundation in Maastricht, the Netherlands. That accounts for just 5% of the total art market, but the report estimates online sales could grow at a rate of at least 25% per annum. Total sales in the international art and antiques market hit 47.4 billion euros ($64.5 billion) last year, up 8% on the year before. 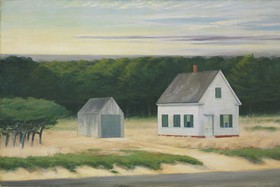 There have been some big-ticket online art sales, however. Christie’s, which started allowing live online bids on auctions in 2006, sold a $9.6 million Edward Hopper painting, “October on Cape Cod,” to an online bidder in November 2012. In addition to streaming auctions, Christie’s launched an online-only sale channel in 2011 with its own fully-integrated platform. Last May, Christie’s also sold American sculptor and video artist Richard Serra’s “Pamuk” in an online-only sale for $905,000. To date, Christie’s has hosted 85 online-only sales, with clients from 185 different countries.

Paddle8 , the online marketplace that hired Britain’s Princess Eugenie last year as benefit auctions manager, sold a giant egg by American artist Jeff Koons last April for $900,000 as part of the company’s “Faberge Big Egg Hunt,” its biggest single sale to date. Bidding activity on Paddle8 quadrupled between 2012 and 2013, and in the first quarter of 2014 and first half of the second quarter, posted $15 million in revenue. (It doesn’t disclose total annual revenue.) Artworks listed on Artsy , a marketplace connecting collectors and those that sell art, range up to $10 million per piece, a spokeswoman says.

But these big ticket items are the exceptions. “Our sweet spot for artworks sold online is the $2,000 to $15,000 range,” says Paddle8 CEO Aditya Julka. “You can buy the same TV anywhere online, but our inventory is unique,” he says. Paddle8 authenticates artwork sold online, he adds, and sees itself as a complement — rather than a competitor — to Christie’s online auctions and the partnership between Sotheby’s and eBay, as Paddle8 occupies a more affordable end of the market. It charges commissions of 6% for sellers and 15% for buyers, less than the 20% or more charged by most brick-and-mortar auction houses.

Collectors shouldn’t be too click-happy when it comes to buying a major piece of art online, especially from unfamiliar dealers. She recommends the “opposite of showrooming” — that is, viewing the art online before assessing it in person to make sure it isn’t a forgery. For checking the market value and provenance of a piece of art, consumers can check auction house records on sites such as ArtPrice and Artnet , although there is no legal guarantee. “The stakes get much higher for buying fine art above a certain level,” Lee-Komaromi says. “People are getting too comfortable with buying art online site unseen.”